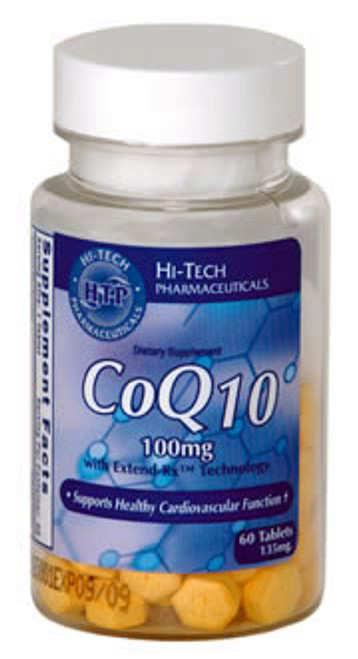 CoQ10 (ubiquinone) is a vitamin-like compound that is produced naturally in the your body. CoQ10 plays an important role in the body's energy production. It is essential to the mitochondria, by facilitating the metabolization of fats and carbohydrates. CoQ10 is also involved in the production of several key enzymes that are used to create ATP, which is burned by the body for energy, and in the energy transfer between mitochondria and cells.

CoQ10 is also an effective antioxidant that has a positive influence on the aging process. As a free radical scavenger, CoQ10 inhibits lipid peroxidation, which is a normal aspect of the aging process that causes cellular damage. As we age, our body's production of CoQ10 declines by as much as 80 percent. Because it is important to energy production, researchers believe that his decline may contribute to aging of the human body. Hi-Tech's CoQ10 contains the proprietary Extend-Rx delivery system.

Recommended Use: As a dietary supplement, adults take 1 tablet twice daily with meals, or as directed by a health care professional. Store in a cool dry place and away from direct light.
Supplement Facts Nutritional Facts Product Reviews