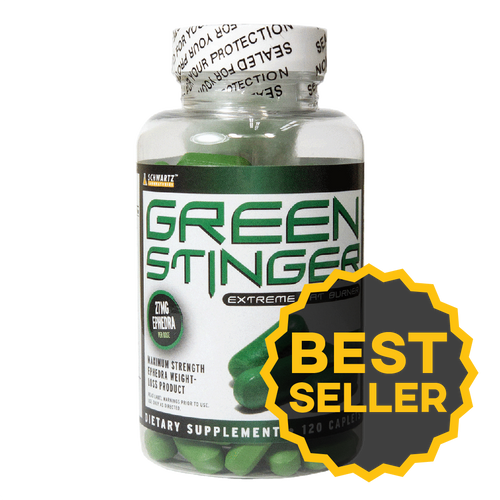 Green Stinger with 27mg of ephedra

Note from the CEO of i-Supplements - I have used almost every product with ephedra since 1997 and Green Stinger might be some of the best ephedra pills I have ever used. This product is amazing! 5 Stars!

What to expect after starting Green Stinger:
Here is a brief overview of each ingredient:

Ephedra Extract(Ephedra sinica) - Is a member of the family of herbs known as the Ephedracae. It has been used in China for more than 4000 years to treat symptoms of asthma and upper respiratory infections. Varieties of the herb are also grown in Europe, India, Australia and Afghanistan. American ephedra, native to the dry southwest, was used as tea by the early settlers, and was known as "Mormon tea" and "Squaw tea." It has also been used in the treatment of headaches, fevers, colds and hay fever. Today, compounds derived from this herb are commonly found in many over-the-counter cold and allergy medications.

Citrus Aurantium - also known as bitter orange, Seville orange and synephrine. It is a well known bronchial dilator, and is used medically to treat chest congestion and indigestion, stimulate gastrointestinal functions, and improve circulatory and liver functions. It’s regularly used in combination with diet pills and weight loss formulas. It’s also used as a substitute for ephedrine and caffeine, since it increases the metabolic rate without affecting heart rate or blood pressure. Thus, causing thermogenesis, which burns calories. It offers all the advantages of a stimulant, without the drawbacks. It functions to burn fat, increase physical performance, and build lean muscle mass.

Acacia Rigidula - A rare, natural compound that consists of several different alkaloids that provide a source of norepinephrine. The alkaloids from the Acacia rigidula are biologically and physiologically similar to those found in ephedra, and possess properties that are shared with ephedra alkaloids. One such property is the ability to pass readily into the brain. The most powerful of these alkaloids is phenylethylamine. It is responsible for effects on mood, appetite and sense of well-being. It is one of the strongest and most effective thyroid stimulating compound in the world. It has the ability to increase the metabolic rate by stimulating your thyroid gland and inducing a powerful thermogenic effect through the conversion of fats into heat. This compound is truly a scientific breakthrough in the world of fat loss and fat burning.

Theobroma CoCoa - A small tree that produces cocoa pods that are fermented and after a long process, packed and sold as chocolate products. The flavanols found in these cocoa pods have been proven in studies to have positive effects on vascular health. In addition, recent research has found improvements in blood circulation and the ability of arteries to dilate, a decrease in the body’s inflammatory immune response and oxidation of LDL cholesterol. Cocoa is believed to surpass even garlic as a protective antioxidant food. And, it just tastes so darn good!

Green Tea Extract - Green tea itself has been the drink of choice for centuries in many Asian countries. It contains chemical compounds called polyphenols, specifically the epigallocatechin (ECGC), which act as powerful antioxidants. These antioxidants neutralize destructive free radicals (that can lead to cancer) and support cardiovascular health by preventing the oxidation of cholesterol. This helps to maintain the integrity of arterial cell walls. Using tea extracts allows for the standardization of the polyphenol content; the assurance that a consistent concentration of these compounds is in each dose.

Yohimbe
Yohimbine HCL - is found in the inner bark of a tree that grows in southern Africa. It has long been known for it’s aphrodisiac effects, but is now more commonly used for the treatment of obesity and erectile disfunction in animals. It has appetite suppressant qualities, which would decrease overall energy intake in those lean and obese who take it. Yohimbine works by blocking the alpha-2 adrenoreceptors. This is important because it increases blood flow in adipose tissue, which prevents fat from being retained in that area. The stubborn fatty areas for men and women are where you will find an abundance of alpha-2 receptors, making it particularly effective in these areas.

Yohimatrix is the name given to the blend of yohimbe compounds Schwartz Laboratories uses to potentiate the effect of green stingers. Yohimbe has be a around for a long time and it is clear that “good” yohimbe – works. In the product Green Stingers, three very specific forms of yohimbe have been combined in specific ratios. Schwartz Laboratories found that this “shotgun” effect of the three different chemical preparations created an uptake and utilization synergy never attained from yohimbe extracts until this discovery.

Naringen - A citrus flavanoid commonly found in grapefruit. There is some evidence that the effects and levels of caffeine can be extended when consumed with naringen, making it great as an addition to any fat burner, since 99% of all fat burners contain caffeine or a derivative of. Who wouldn’t want to improve and extend the effects of such a powerful ingredient if they could? Lastly, cholesterol-lowering effects have also been seen.

Pure White Willow Bark Extract (salicin) -which the body converts to salicylic acid when ingested. This active ingredient has a synergistic effect when combined with Ephedra to promote the thermogenic process. Thermogenesis is the raipid conversion of the food we digest into heat before the calories can be stored as fat. Aspirin (today’s version of salicylic acid) is very similar, actually made from a different salicin-containing herb, but works in the same way. Salicin has the same pain relieving medicinal effects as aspirin, but doesn’t have the common side effects of today’s aspirin (GI bleeding and discomfort). White Willow Bark has been shown to be an effective addition to widely used herbal weight-loss supplements.

Evodiamine - A bioactive alkaloid extract from a plant called Evodiae Fructus. It is found in many weight loss products. It is known to produce a stimulating and thermogenic effect, which warms the body’s inner core to a point where fat and water weight are burned. It has been found to be very effective for weight loss and adding that extra energy boost for workouts.

Caffeine - Found in varying quantities in beans, leaves, and the fruit of over 60 plants. Caffeine is most commonly consumed by humans in coffee and tea, as well as various foods and drinks containing products derived from the kola nut, yerba mate, and guarana berries. It is a central nervous system stimulant, having the effect of temporarily warding off drowsiness, and restoring alertness. It is highly effective as a thermogenic for weight loss and improving performance when working out.

Directions: As a dietary supplement, take (2) caplets 2 times a day.

Note: Proper Hydration is important to the effectiveness and safety of all thermogenics.

Warning: Not for use by individuals under the age of 18 years. Do not use if you are pregnant or nursing. Individuals who consume caffeine with this product may experience serious adverse health effects. Individuals who are sensitive to the effects of caffeine should consult a licensed health care professional before consuming this product. Sale to persons 17 years of age or younger is prohibited. In case of accidental overdose, seek professional assistance or contact a poison control center immediately. Avoid alcohol while taking this product. Do not exceed recommended serving. Exceeding recommended serving may cause serious adverse health effects, including heart attack and stroke. Discontinue use and call a physician or licensed qualified health care professional immediately if you experience rapid heartbeat, dizziness, severe headache, shortness of breath, or other similar symptoms. Improper use of this product may be hazardous to a person’s health. Exceeding recommended serving will not improve results.

KEEP OUT OF REACH OF CHILDREN.

These statements have not been evaluated by the Food and Drug Administration. This product is not intended to treat, cure, diagnose, or prevent any disease.

Ephedra contains two alkaloids, ephedrine and pseudoephedrine. Ephedrine, the main constituent, is a bronchodilator and stimulates the sympathetic nervous system. It has valuable antispasmodic properties, acting on the air passages by relieving swellings of the mucous membrane. Ephedra is often combined with caffeine, guarana and other ingredients to improve its effectiveness. These chemicals are found to suppress the appetite and increase metabolism.
Supplement Facts Nutritional Facts Product Reviews
Write a Review