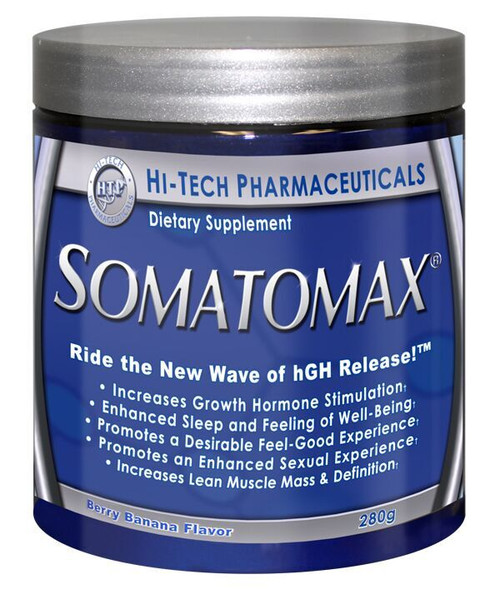 Somatomax is a unique new nighttime formula that can majorly increase the amount of HGH you release by over 1,600% during the first few hours of sleep, which is when the vast majority of HGH is released. Somatomax produces important physiological, biochemical, and behavioral effects when taken orally. The possible benefits that Somatomax administration has upon athletic performances are remarkable. Somatomax has been shown to do the following:

HGH secretion by as much as 16 times that normally produced (HGH presence in the body’s system is critical for: 1) protein anabolism and muscle growth and repair; 2) cartilage growth and repair; 3) fat metabolism that induces less body fat and more muscularity.)

A 2004 Belizean and Chinese research study demonstrated that from a single dose of Somatomax, plasma HGH levels increased 16 times over a two-hour period, peaking after 60 minutes.

Injected HGH has a very short half-life of 20 minutes in circulation and 2 IU Protropin® or Humatrope® will only increase circulating HGH levels by approximately four times. HGH is of great importance in human growth and development. Its secretion diminishes with age. HGH regulates cellular transport of amino acids and has a pivotal role in protein anabolism. Muscle and cartilage growth and repair are under the positive influence of this hormone. HGH also promotes fat and carbohydrate metabolism. It stimulates adipose (fatty) tissue to release fats and helps in mediating the switch from burning predominately carbohydrates to predominately fats for energy.

HGH has been used (or seriously considered) by many athletes, regardless of its legality and its great expense, to elicit the obvious advantages of greater plasma concentrations. Somatomax provides an alternate, more convenient, natural, and inexpensive method of substantially increasing HGH plasma levels beyond previous parameters. Somatomax also exhibits other anabolic properties in addition to those produced by the increased HGH secretion by stimulating protein synthesis, activating the pentose pathway (carbohydrate and protein metabolism), by limiting nitrogen catabolism.

Somatomax Induces Sleep And Acts As A Muscle Relaxant

The study by Pharmatech Ltd. on Somatomax explored the effect it has on inducing sleep and providing “remarkable hypotnia” (muscle relaxation), probably resulting from inhibition of muscle stretch. This study concluded that Somatomax is a rapid sleep-inducer. The sleep is calm and deep, with rapid, complete, and good quality awakening. Somatomax - induced sleep closely resembles normal physiological sleep patterns, causing slow-wave sleep almost immediately, followed by a predominance of REM sleep. These studies also showed that periodic brief arousals during deep sleep result in impaired daytime performance and increased fatigue in normal young adults. Somatomax consolidates sleep, aids recovery and recuperation, and leads to increased daytime function and ability. This action of Somatomax™ is especially meaningful for hard training athletes. If recovery and recuperation can be amplified, then workout intensity and productivity will be maximized.

In the training athlete, numerous changes in anabolic hormone levels accompany workouts and play a direct role in muscle fiber growth and body composition. Of the anabolic hormones testosterone, insulin, and HGH, HGH is unique in that it directly promotes increases in muscle mass and decreases in body fat. In the normal course of events, HGH is produced in the pituitary gland and is released into the bloodstream, but in amounts that decrease with age. These reduced HGH levels are one of the reasons why people tend to accumulate more body fat as they grow older. The most significant and noticeable effects of Somatomax™ are its HGH-releasing sedative actions. The HGH releasing effects of Somatomax™ have been shown in healthy males, ages 25 to 40, who receive one dose of Somatomax™. Within 30 minutes of administration, blood HGH levels were 9 times higher than normal (pre- Somatomax™); after 45 minutes, HGH levels were over 16 times higher than normal. Two hours after Somatomax™ dosing, the subjects’ blood HGH levels were still 7 to 8 times higher than baseline. An additional revelation has shown Somatomax™ to release HGH in significant amounts and reduce protein breakdown. The sedative action of Somatomax™ contributes to restoration of normal sleep, metabolic recovery in individuals experiencing overtraining/overstress syndrome related to insomnia, and the stimulation of general anabolic facilitating processes.

Power lifting and weight lifting place tremendous metabolic demands on the skeletal, muscular and endocrine (hormonal) systems. Increases in tissue synthesis and repair can lead to the over-training spiral, causing excessive muscle breakdown and injury. HGH is a very powerful non-steroidal hormone that combats the potentially damaging effects of stress, and heavy training upon the anatomy. Somatomax™ is quite possibly the most powerful HGH-releasing stimulator yet to be discovered!

One Side Effect To Somatomax Is Its Ability To Make You Feel Good!

Somatomax causes a large increase in levels of a neurotransmitter called dopamine. Dopamine has a very noticeable effect on mood, causing you to feel good. Ironically, very large amounts of dopamine in the brain can cause nausea, especially in those using Somatomax™ the first few times. Therefore, it is advisable to reduce the amount of Somatomax™ consumed the first few times to prevent nausea. It also has an effect similar to alcohol in that it effectively removes inhibitions, which is beneficial as a sexual stimulant.

Somatomax is a dietary supplement used as a nighttime formula to enhance natural sleep and to assist the body in the release of natural hormonal compounds, including HGH. Somatomax™ may also be used in smaller serving amounts as a daytime formula for a feeling of well-being, increased energy, and to enhance libido and sexual function. In conjunction with proper exercise, Somatomax™ will lead to an increase in muscle and a reduction of fat. Clinical studies on Somatomax™ suggest that Somatomax™ significantly stimulates HGH and modulates cortisol (resulting in a decrease of blood cortisol levels), which makes Somatomax™ a particularly effective supplement for males desiring to increase muscle mass. GHB and its precursors (GBL and BD) were clearly powerful HGH secretagogues, but changes in the law make those products no longer available to us. (GHB is a Schedule I drug for you or me, yet a prescription drug called Xyrem® by Orphan Medical… figure that one out!)

Somatomax, however, is now available to us and is more effective than any previous HGH stimulator, including prescription HGH products. Let us just hope that the FDA will not try to pull another safe and effective product off the market, as they have done in the past. Somatomax™ can help HGH stimulation, but that is just one of many positive effects this amazing product has on our health and well-being.

Suggested Use: Take one heaping scoop of Somatomax with water or beverage 30 minutes prior to bedtime.

Warning: DO NOT operate heavy equipment when using this product. This product may cause drowsiness. DO NOT consume this product with alcohol or medications as it may cause side effects. Excessive serving amounts may result in dizziness, nausea, euphoria and diarrhea.
Mood Enhancement products are great for people who do not like to drink or do illegal drugs. Whether you are looking to sleep better or just to relax after a stressful day, I-Supplements offers a great selection of these mood products so you can be more social or so you can just chill! These all natural products are not harsh on your system and you will feel great the following day after use.
Supplement Facts Nutritional Facts Product Reviews
Write a Review